“Making photos that are as capable as the human eye is a very big deal. And when using HDR, the extended dynamic range can even go beyond what the human eye can perceive, creating images that have never been possible before. This means that with your photos and HDR, the world can be seen in an entirely new way.”
― Harold Davis, Author of Creating HDR Photos

I’m exploring the in-camera HDR function on the Canon 5D Mark III and 7D Mark II.  Above is a photo taken from the 7D Mark II at the Laughlin River Rally this year. I ended up using this mode often at the rally and enjoyed the ease of it without post editing.
The exposures are set each time in-camera, but it works itself into one photo. A nice time saver in post editing, but a time waster in shooting.
Below is another Laughlin pic. I will be doing some post edits on this one for sure and will update on that.
Learning creative ways in PS has opened new spurts of “I can’t wait to try that” moments. It’s a rush of sorts. 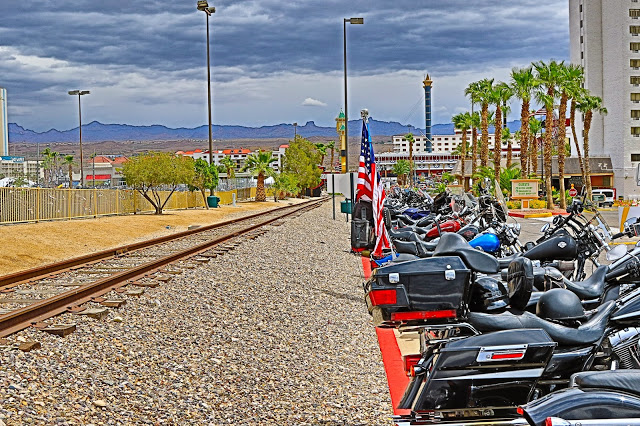 Here is another photo of the Orange Plaza Patriots’ weekly flag ceremony.

You can see some movement on this photo, so I have to keep that in mind when shooting in-camera.  Compared to using an HDR desktop software, the in-camera ease of use is nice but not without adjustments to settings and patience.  In saying the negative here, I am sure I will get accustomed to the workings of this mode.  Putting the camera on a tripod would help in almost all instances to keep camera shake from happening which is a big deal when holding still for three shots, even when they are fast ones.  So a bit of learning the knowledge of this mode will go a long way for future’s sake.

Thanks for stopping in.  Til next time…